The 3 Acts of Selling Insurance

As a young man I read Ernest Hemingway with great enthusiasm. Several of his books discussed bullfighting and I’ve always wanted to attend a bullfight to see what it was like.  Recently, I had that opportunity in the company of my sons during a visit to Madrid.

While the experience was interesting in many respects I was struck by how carefully the whole thing is structured in order to produce a successful result. As Hemingway explains in “Death in the Afternoon” the bullfight is organized in three sections, each with a defined purpose, and each essential to the others, in accomplishing the end result of the bullfight: the death of the bull.

You see, the bull always dies.  Whether in the ring at the hands of the matador (literally “killer of bulls”) or in the corrals after an unsuccessful effort by the matador the bull, by law, must die.  The bull’s death is central to the whole contest, but so is the matador’s safety. 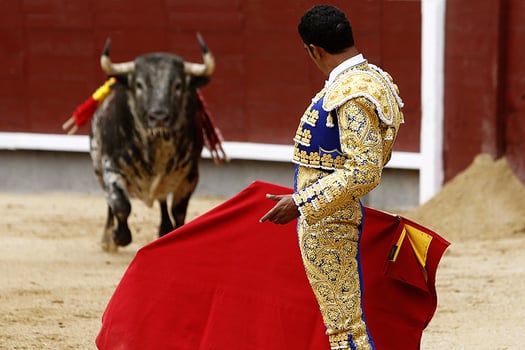 To this end the three parts of the contest are carefully structured, and each succeeding part is absolutely dependent upon the successful conduct of the ones preceding it.

The first “tercio” or part is when the picador begins to weaken the bull.  This is done for two reasons: to cause the bull to lower it’s head for the matador’s safety but also to focus the bull’s attention.  The bull must be brought from a place of distraction to a condition where he is focused on the matador’s actions and can be led by him.

In the second “tercio” the banderillo’s place pointed sticks in the bull’s back.  These further weaken the bull with the intent of creating additional focus. But they also are used to cause the bull to change certain undesirable behaviors like uncontrolled hooking of the horns.

The point of these two parts is to get the bull’s attention, prepare the bull to focus and follow the matador’s leadership and to remove obstacles to the successful conclusion of the third “tercio” which is the quick and humane killing of the bull.  Only if the first two parts are done correctly can the third be accomplished at all.

So, what does this have to do with selling?

Lessons from the Matador

I hope the answer is obvious.

In selling anything a process must be followed if the effort is to be successful.  At the beginning a prospect is probably not interested in buying. Perhaps before the salesman showed up he was completely unaware that he might even have a need for the product.

As the interview begins the prospect is not focused on the process and, like the bull, possibly even hostile to it.

The time required to establish rapport is critical in this process and if not properly done trust will not have been established which is required in the final act of selling: the close.

In the second part of the sales process the prospect must be qualified.  If the salesperson does not do a thorough and complete job of qualifying the needs and capability of purchasing the product then, again, the final act of closing will be unsuccessful.

It is clear that the third act, the close, can only take place after the successful conclusion of the first two.  If the salesman does not have rapport, and trust, the prospect will not give the information needed to qualify.

Without the qualification the prospect will never buy and so the close is impossible.  Just as in the bullfight the three parts of the process must be followed and respected for there to be a successful conclusion.

It’s All About Relationship Selling

Many times in the poorly run insurance agency the first step is skipped entirely.  The inexperienced salesman goes immediately to fact gathering (which is not even qualification really) and follows this with order taking (which is not really selling).

A sale may result from this process but it will be to someone who will never be a “customer” but merely a transaction.  Whether this person ever buys again is completely in doubt because there is no rapport and no relationship.

Increasingly in the future, buyers of insurance interested only in transactions will accomplish them electronically with no contact with an agency.  The agency that focused on selling products in this way will no longer be able to remain in business.

In the future relationship selling will be the only means of insurance agency survival. Insurance sales people who do not follow the necessary steps will be as unsuccessful as the matador who cannot kill the bull for failure to accomplish the “tercios” in the correct way.

I would like to invite you to come "Grow with OAA" at the 16th Annual Spring Success Conference and...

Agencies SHOULD NOT Be Paid Commission

What is an insurance agency?  Well, among other things it is a retailer of products. In the U.S....