How to Determine Your Insurance Agency's Value

As agency owners, we are all aware that as we build income in our business we’re also building value. For most of us, tracking that value is something we like to do because eventually, due to retirement or other reasons, we know we will want to sell.

Generally, small agency owners think of the value of their agency in terms of a multiple of revenue or income. This is a handy shortcut but it doesn’t fully address what any business, including an insurance agency, is worth.

While gross revenue and the size of an agency’s client base can be factors in valuing an agency, buyers ultimately want to know what your profitability or earnings are, and they use a multiple of that number, rather than gross revenue to value a business they are considering buying.

But even in doing this, problems arise because some agencies have certain types of expenses others don’t, or they have some unusual expenses. And items like interest expense, taxes paid, depreciation expense, and amortization expense are treated differently depending on the type of legal entity or other differences in an agency. 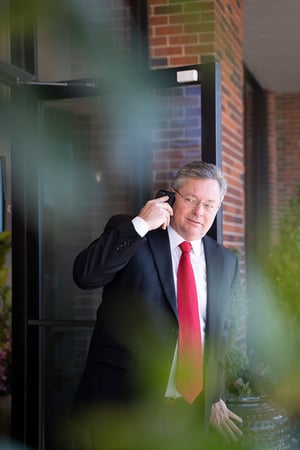 In order to normalize the financial statements of a broad array of agencies, buyers and sellers like to remove certain items, such as interest, taxes, depreciation, and amortization from the expense side of the income statement, in order have a clearer idea of how a business will perform if they buy it. This earnings metric, known as EBITDA, is exactly that. In fact, EBITDA is an acronym that stands for Earnings Before Interest, Tax, Depreciation, and Amortization.

In our day-to-day operations, we don’t often stop to think about EBITDA, but it’s a key component of our agency’s value. I recommend that each year agency owners do the calculations to determine EBITDA for their agency as a necessary part of tracking agency value.

Of course, once you have this number you can easily determine what the marketplace is currently using for an EBITDA multiple and determine your agency’s value.

The profit that an agency generates is the rational basis for determining value and the worth of the agency is based on this. So, profit matters. A lot.

Don’t Use the Common Rule of Thumb

I recently had a very interesting conversation with an agency owner about his agency market value.

This agency owner is a very bright guy but had never given much thought to the subject.  When I asked what he thought his agency was worth, he told me 1.5 times commission from his agency’s book of business.

Unfortunately, my friend was repeating an often-used rule of thumb for insurance agency valuation. The problem with valuing anything on the basis of gross income is that it’s not an accurate method. It only includes gross revenue in the equation. It fails to account for expenses, which are an important part of the expected return on investment of a potential purchaser.

If you think that you will ever consider selling an insurance agency, then you need to understand how buyers view agency value.

Value is Determined by Comparison

Value is always determined by comparison.

If insurance agencies were expected to generate a 5 percent return to their owners, how much would a rational person pay for the two agencies in my example? Of course, they would pay $4 million for the first one but only $1 million for the second one.

So, as you can see the profit that an agency generates is the rational basis for determining value and the worth of the agency is based on this.

Pay Yourself Less to Build Value

The problem is that owners tend to pay themselves bigger and bigger salaries, or high commission rates, as their agencies grow and they tend to keep profits low. This is clearly a mistake when it comes time to sell!

The better way to build value in the long-term, while maintaining income is to pay yourself a smaller salary and take a distribution of profits.

Your cash flow is the same, as is your tax bill, but your agency value and your net worth are much larger.

To build value while maintaining income, pay yourself a smaller salary and take a distribution of profits

Now, if he really works on maximizing his profits and equals the most profitable agencies who generate about 25 percent profit, his agency could be worth as much as $2 million! That’s far more accurate and far more profitable than the old 1.5 times commission, isn’t it? It’s also far more realistic.

If you want to maximize your agency’s value and the quality of your retirement for that matter, focusing on building agency profitability is critically important!