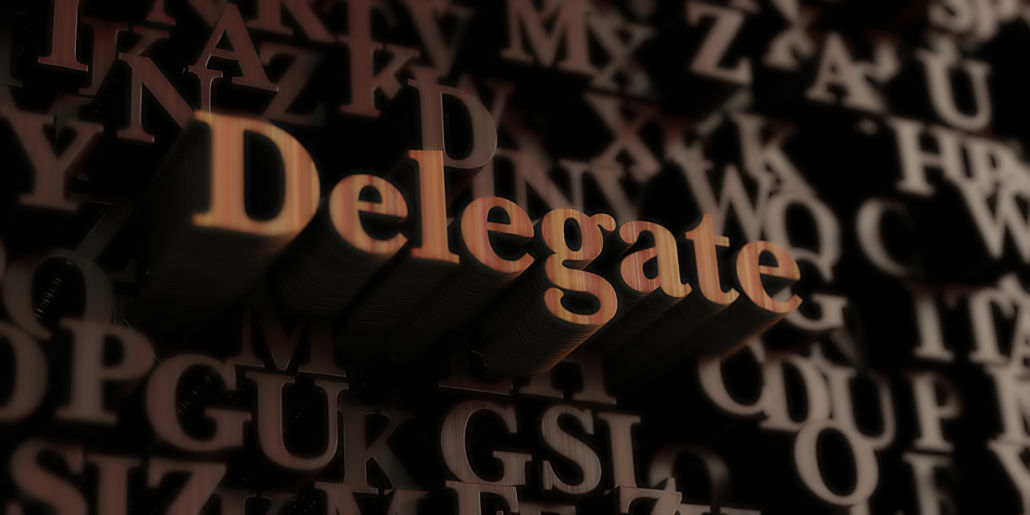 Delegate - Wooden 3D rendered letters/message. Can be used for an online banner ad or a print postcard.

My business coach, Dan Sullivan, wrote a little book entitled, “WhoNotHow,” which describes a powerful means of getting unstuck and making additional rapid progress in your business. The idea, which I have written about before, is that not knowing “how” to do something creates paralysis and procrastination.

This procrastination always leads to delay and loss of opportunity. Projects that might eventually happen, often never do because the delay causes defeat and one simply gives up. Focusing on “who” already knows “how” allows the entrepreneur to continue to make progress as the focus changes to looking for the appropriate “whos” instead of trying to learn to do yet something else, according to Dan.

I’ve worked at freeing myself up to focus on the things only I can do by working on this principle for the last year. The results I’ve had in terms of personal and business progress have been amazing!

Yet I find that I am still frustrated sometimes at my progress or lack of it. Recently I was speaking to a close friend of mine, Mike Sterlacci, of Dallas, Texas. Mike is a very successful entrepreneur and insurance agency owner himself. I described my frustrations to him and told him that even though I’d freed myself up, that it’s hard to stay that way. Things that happen in the business seem to conspire to pull me back into things I had given up. I told him that my impulses to want to control things also became an issue as I found myself in a self-created push-pull.

His point was that freeing myself isn’t about me. It’s about a team of people around me. He said that the frustration I feel when I’m doing things I should better delegate to others with giftedness in that area is the Holy Spirit telling me to let go.

Mike's comments gave me immediate and absolute clarity. As I free myself from those things I am not good at, I not only enable my progress but the progress of others. That’s a valuable lesson; even if you don’t view it from the lens of faith as he and I do.

When I hold on to things or retrieve responsibilities from others instead of letting them spread their wings, I not only frustrate myself but deny them the opportunity for growth. Yes, sometimes the people you entrust don’t deliver, which creates an opportunity for creative trading up of people or capability, but not an excuse to not let go, or, as Dan Sullivan says, “who up.”

What things are you holding onto that would be better accomplished by someone else on your team? What progress can you AND your team make by letting go and "whoing up?" It’s not just about you – it’s really about your team – and those who make the most progress build great teams. Feed those sheep!

In the 1930s, Abbott and Costello began performing their famous routine on radio.  In the sketch,...

If you want to confuse someone, just use an acronym they are not familiar with. In my conversations...