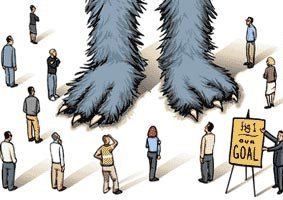 I have known many business people who were successful.  I have known a few who would be considered incredibly successful by just about anyone.  I don’t know what the dividing line between the two is, it’s one of those you’ll know it when you see it things.

Some of the “successful” people were driven by goals and some weren’t.  But all of the “incredibly successful” group have in common a commitment to achieving a concrete set of goals they have developed for themselves and their organizations.  These tremendously successful business people didn’t set easy goals, or goals that practically anyone could believe in, they set really ambitious, tough, and hard to see how we’re going to do it goals for themselves and their company.

In their article in the “Harvard Business Review” entitled “Building Your Company’s Vision” James Collins and Jerry Porras describe the kinds of goals that motivate and drive organizational success as Big, Hairy, Audacious Goals (BHAG’s pronounced as BEE-hags).  These are the kinds of goals that aren’t the run of the mill “grow 10 per cent this year” or “be the best ____ in our market” stuff.  According to Collins and Porras a BHAG is “clear and compelling, serves as a unifying focal point of effort, and acts as a catalyst for team spirit.  It has a clear finish line…”.

BHAG’s are tough!  They aren’t “a sure bet”.  Typically, Collins and Porras say, a BHAG “requires 10 to 30 years of effort to complete” and “have perhaps only a 50% to 70% probability of success – but the organization must believe it can reach the goal anyway.  A BHAG should require extraordinary effort and perhaps a little luck.”

Really, BHAG’s are dreams.  The interesting thing to me about big dreams is that they are inspirational.  They are motivational.  They are powerful when they are shared.  Who wants to have small dreams?  A BHAG is a BIG dream!  In their Harvard Review article Collins and Porras list outstanding company after company whose BHAG was the thing that drove success.   Many of the companies listed in the article, who had achieved tremendous success in pursuit of their BHAGs, where really big and well known.  But most started small and modestly like Hewlett Packard did in a founder’s garage.

Where to you want to go?  What do you want to achieve for yourself and your company?  What are you afraid to verbalize?  That is the beginning of a BHAG!  Let it scare you a little.  Let it seem just about impossible and you’ll be on the cusp of finding your dream.

Now, envision what the future looks like after the BHAG is realized.  What does it feel like?  What does it mean to you and your team?  Is it incredibly exciting?  Is it motivating?  Then commit to it even though it’s scary!  Write it down.  Say it out loud.  Talk about it a lot.  And work hard every day to make it come true.

Watch what happens to you and your organization!

I’ve written about the critical importance of cash flow, and the difference between that, and...

Should Agents Be Paid Commissions?

Do you remember a few years ago, before he was caught using prostitutes, the former New York...