Get to Know Us

Q: If you could only tell people one thing about the company, what would it be?

"We believe in what we do and are passionate about helping each other and our members be successful.”

When you look at the life of Tony Caldwell, the term “renaissance man” comes to mind. In addition to building OAA into one of the largest regional insurance distributors, and his reputation as a business and insurance industry thought leader, he’s a serial entrepreneur, writer, mentor, children's advocate, outdoorsman and pilot, as well as a man deeply involved in his community.

Members know him through his insightful videos and blogs, as well as in-office events, all showcasing his warmth and down-home sensibilities, but might not know that he was twice elected to the Oklahoma House of Representatives, or that his first career pursuit was the ministry!

While he may not have become a minister, Tony’s certainly an evangelist for insurance agent independence.

It’s striking that OAA employees and members all talk about “dreams.” This is a core value for Tony and OAA. “Helping independent agents reach their goals is fun and enormously satisfying. I like to think of us as a dream factory.”

To that end, Tony and his employees have helped independent agents create over 250 independent insurance agencies, making OAA one of the U.S.'s largest regional insurance distributors with over $500 million sales, and the number one ranked Strategic Master Agency of SIAA with 165 insurance agency partners. He’s also led to OAA’s recognition for the third year in a row as one of Oklahoma City's fastest growing businesses.

In his spare time, Tony enjoys time with his family. He’s also an active outdoorsman and instrument-rated commercial pilot. Flying is a particular pleasure. “It’s enormously satisfying on every level. I love seeing the ground from up high, and flying demands great physical skill and a lot of concentration.”

Tony and his family are members of Crossings Community Church. 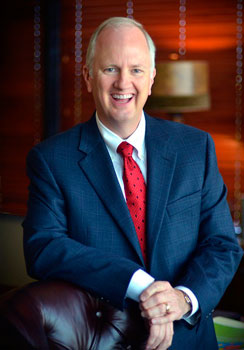